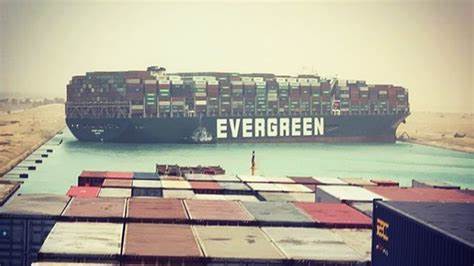 The mega-container ship the ‘Ever Given’ is owned by the Taiwanese firm ‘Evergreen Marine’, has obstructed global trade and shipping passages through the Suez Canal after becoming shipwrecked due to extreme high winds. Due to its ginormous size, the ship has been an immense pain to refloat, as the operation itself could take a prolonged time of up to multiple weeks.

This’ll put a severe dent on many supply chains who are already suffering heavily from the COVID-19 pandemic, costing an estimated $9.6bn worth of goods through daily traffic in the canal everyday, as reports stating that at least 160 other ships are currently on hold at either end of the canal. Firms are taking various other options into consideration, such as flight based merchandise transport for more high-quality products, or even transport via several railway systems. Some have questioned whether vessels like the ‘Ever Given’ have gotten too large, as more problems of terminal congestion and length waiting lines for berths in ports arise around the globe.

Many are working hard to free the Ever Given from the Suez Canal as soon as possible, patience has been called to make sure the ship, cargo, crew and surrounding environment are secured and sheltered as possible.